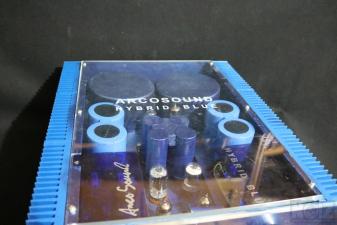 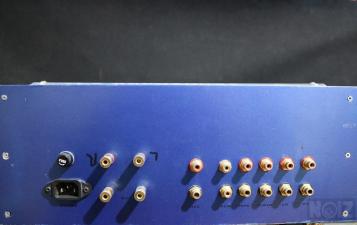 One of the most appreciated amplifiers made by Arco-Sound is this ,because of the evolved technology it contains and the very high performances it has. As the title said , it is a hybrid construction, meaning it combines tubes and solid-state blocks and they are working together remarkable.In fact,this amp.is a double-monoblock construction ,having two separate power supplies and also two separate amplifiers inside. The power stage of each part is based on the last developments in power transistors made by Mr.Randy Slone,-who continued the tradition of Mr.Douglas Self ,and the power stages made by him are near perfect ,despite “the class B “he used.The schematics I choose were built with very strong conventional power transistors,(MJE 150.025-26), and not with “Fets” ,to keep the price down, and despite this ,the amp is” loud and clear” ,even very loud!For the rest of the transistors,I used also MJE-340,350 and similar ,but selected with attention, and that was one big secret of those schematics..The preamplifier ,was a tube preamplifier(2x6SN7-6H8C)double triode ,cascade mounted to give the power stage enough tension to play normal. That was the line-CD stage.and for the MM Phono- stage I used two tubes 12AX7-ECC83-with a passive RIAA between the triodes.The double power supply were realized with two strong bridges and four very big electrolytic capacitors(24000MF),a stabilized hi-tension for the tubes (ECL82) and a very special relay-tube ,which gave some time to the tube for warming.The mechanical construction was also impressive.Left-right were mounted the radiators,and inside .between it ,the tubes sections + the EM84 magic eye.
Τιμή συζητήσιμη και ευκολίες πληρωμής. https://www.facebook.com/ArcoSoundOfficial